The game Space Treasure Hunters for Android and iOS from GameStylus has been released. 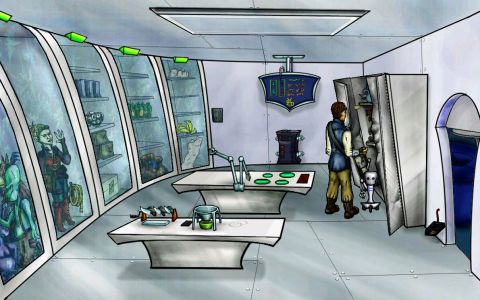 What is the new game about? After the Third Galactic war, many worlds were left in ruins. In these ruins remained treasures of inestimable value. Hundreds of treasure hunters are crisscrossing the Galaxy. One of them is David Fox - and it seems that he finally got lucky...

In the first part players discover clues that the famous treasure hunter left in the Space restaurant. They will go to the place where one important treasure should be hidden. In the second part they will follow the footsteps of scientists who discovered the precious T-gems, which are full of energy. They will find out where their Hyperspace ship is and head to the place where the greatest cosmic treasure of all time is hidden.

Multilanguage, Super Help and Auto Save The games are multilanguage: in English, German, Russian and Czech languages. These are classic hand-drawn adventure games (point and click), there is the SuperHelp for quick help in the game and the AutoSave feature to save game positions.

The first episode of the new series is free, the second part, which offers nearly double of the locations, is sold for $1,30.

The previous game, Alice and The Reformatory for Witches, which was published in November 2016, has more than 500,000 downloads now - with an average rating of 4.4 out of 5. During this year, the GameStylus studio is going to publish at least two more games: The Island of 16 sisters and also the third episode of the successful series about the witch Alice.

All the games are available now, you can get them here:

Update: Both games are available for Apple iOS now.

Alice and The Reformatory for Witches: